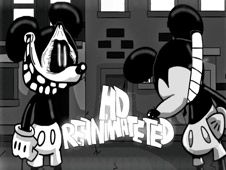 If you've been following FNF Games for a while now, you must know that one of the latest mods to have jumped in popularity from the get-go had been the FNF Suicide Mouse mod, which features a depressed and scary version of Mickey Mouse, against who you will now battle on all of the songs made for him, with HD graphics, backgrounds, and sprites, to there are plenty of reasons to play the game! What are the songs? They are the following:

Defeat Suicide Mouse with music once more, this time in high-definition!

Make a choice between the story mode and free play mode, but no matter what you pick, know that to win you need to reach the end of the songs by playing all their notes according to the charts, because if you miss hitting the notes multiple times in a row, you end up losing and having to start again from scratch.

To hit the notes, when you see arrow symbols match above BF, press the identical arrow keys yourself. Good luck, we wish you the best, and hope to see you around even more, only on our website!