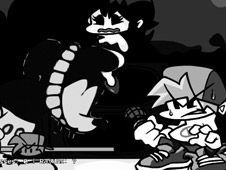 What is Friday Night Funkin’ Vs Suicide Mouse V2?

Ever since its debut, the FNF Suicide Mouse Mod has made quite the ruckus in the world of FNF Games online, so we are very excited that at this moment we can share with you an updated version of it, known as V2 because this one brings two more songs in the addition of the original ones, and, they are:

Boyfriend Vs Suicide Mouse, Round 2, BEGIN!

Whether you choose to play this in the story mode or free play mode, the goal you have is identical, and it is reaching the end of the songs by playing all their notes since that is the only way to win.

To do this, you watch for when arrow symbols above BF match, and at the same time you press the identical arrow key, but if you miss doing it too many times in a row, you end up losing. Enjoy!