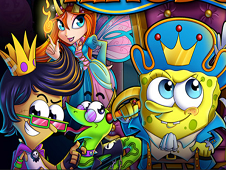 What is Nick Kingdom?

Nick Kingdom is a thrilling game that appeared on our site in which you have in the forefront of our heroes Nickelodeon series: Sanjay and Craig, breadwinners, Ninja Turtles, Spongebob, Power Rangers, Winx, and many others. Give us a like if you enjoyed our game and leave us a comment with your opinion on this series. In this game, you have to choose which kingdom you want to protect it from attack enemies. Each series from Nickelodeon has a kingdom that is threatened by evil forces and should help to protect serial heroes of the kingdom. In this game, you need only a mouse with which you have to fulfill the tasks step by step.

You must have a good strategy in the fight because only you will save the kingdom. At each level, you need to think well about where to place fighters that will protect the kingdom of enemies, so to face attacks and move to the next level. At the bottom, you have the place where fighters and buy weapons to defend the kingdom put them.

As you progress to higher levels will be increasingly more difficult to successfully achieve your goal, so you have to work a lot.