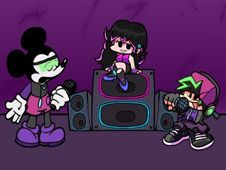 What is FNF vs Suicide Mickey Mouse.AVI Neo Remix?

Suicide Mouse is the most depressed mouse in the world of FNF Games online, but today he is getting a colorful makeover because of his classic mod that has become really popular is now made in Neo colors, so everything will be more colorful and futuristic, making this surely a hit of the day, since previous FNF Neo games were also very well received!

Defeat Neo Suicide Mouse to snap him back into happy mode!

Well, after picking between the story mode and free play mode of the game, know that your goal is the same, and it is to reach the end of the songs by playing all their notes according to the charts since that is when you win.

To do so, watch for when arrow symbols match above BF's head, and, when they do, make sure to press the same arrow keys from your keyboard to hit those notes.

Of course, missing to hit too many notes in a row leads to you losing the game, so be careful not to let it happen. Good luck, enjoy!