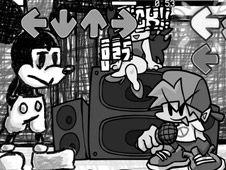 What is FNF vs Reimagined Suicide Mouse.Avi?

FNF Suicide Mouse.avi is constantly one of the most popular FNF mods online to have appeared on our website in the past few months, and lots and lots of versions and spin-offs have appeared so far, with one of them being brought over to you right now, in the form of a reimagined game where the graphics are better and look different, and the songs have been remixed!

Once again, Suicide Mouse is here, so defeat him!

Whether you face this character in the story mode or free play mode, the goal you have is identical, and it is playing the notes of the songs at the right times in their charts, and reaching the song's conclusion to win.

This means that when you watch arrow symbols above BF match with one another, you'll have to press the same arrow keys from your keyboard to hit those notes.

Of course, losing is an option, and it happens if you miss hitting too many notes in a row, something we hope you work hard not to let happen. Enjoy!