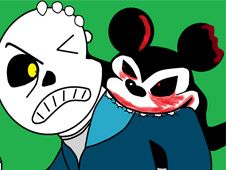 What is FNF Suicide Mouse VS Sans?

After Boyfriend managed to defeat the Suicide Mouse, he went around looking for other competitors, which he found in the character of Sans from Undertale, who you will now help defeat this antagonist in a rhythm battle, with this awesome mod that is dedicated for the two of them, a mashup we are sure you will really enjoy having!

Suicide Mouse Vs Sans, the next hottest rap battle!

When you see arrow symbols matching above Sans's head, press the same arrow keys on your keyboard, and keep doing it until the end of the song in order to win, but be careful not to miss pressing the keys too many times in a row, since that leads to your defeat.

Hit the play button, as there is only one song and only one way you can play this game in, and start having fun as it is possible only with our amazing content!