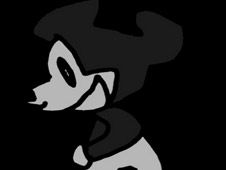 What is FNF vs Suicide Mickey Mouse But Bad?

The Suicide Mouse character has blown up in the world of Friday Night Funkin', which is why there had been so many mods out there to feature him, with the original one having sparked all this, and now it returns with a brand new look, because you will get the bad version of that game, meaning that the graphics are bad, the music sounds horrible, and this makes playing the game quite funny!

No matter if you chose the story mode or the free play mode, your goal remains the same, and it is to reach the end of the songs by playing all their notes since only then do you win.

To do it, when arrow symbols above BF match one another, you will have to press the same arrow keys on your keyboard, but be careful not to miss doing that too much, or you lose.

Good luck to all players, and we hope you have fun, just like we did!