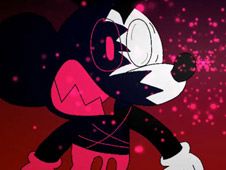 What is FNF: Suicide Mouse Sings new Song “A Fate Worse Than Death”?

It seems that Suicide Mouse is back on our website today as well, when you get to go up against him on a brand new song, which you've seen the name of in the title, and just like with all previous encounters you have had with this character, we've got a hunch that you will really love this one as well, so not playing this game should be out of the question!

Sing with Suicide Mouse once more, you won't regret it!

Since there is only one song, simply hit the play button, and then try reaching the end of it by playing all of its notes according to the chart. How do you do that?

Well, when arrow symbols above BF match one another, press the same arrow keys on the keyboard but know that if you miss doing it multiple times in a row, you need to start again from scratch. Enjoy!