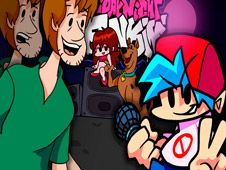 FNF mods with Shaggy have always been some of the most popular ones we've added here, so we are delighted that at this moment we get the chance to share with you all the amazing game that is this one-song mod, where you go up against this character on a long-lost song called 'Ultra Instinct'!

As the song progresses, you will see arrow symbols float and match above BF's head, which is when you have to press the identical arrow keys, something you need to keep doing until the conclusion of the song to win, since that is how you hit your mark on the notes.

Know that missing to hit the keys too many times in a row leads to you losing, so focus not to let that happen. Good luck, and all the best we want to wish you all, as with all of our games, for that matter!