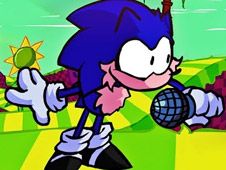 What is FNF Manual Blast – A Sonic.EXE song?

Defeat FNF's Sonic.Exe on a forgotten song called 'Manual Blast' which was intended to appear on the original mod but was left off, so now it is available for its own mod, where we're sure you will have simply the best time!

When you see the floating arrow symbols match above BF's head, that is when you need to press the identical arrow keys to hit your notes, and you need to keep doing it until the song ends to win. Pressing the wrong keys, or pressing the right ones too early or too late, you miss notes, so don't miss too many in a row, you will lose. Good luck, enjoy!