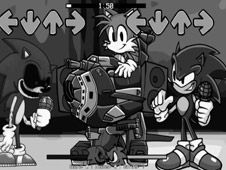 What is FNF: Sonic.exe and Sonic Sings Happy?

Happy from Pharrell is not the song you are thinking of when you think about Sonic.Exe, the most horror version of Sonic, but it is on this song that the original Sonic the Hedgehog will have to defeat him on, and we hope that you are ready to try out this game and help him out with all of that!

Sonic Vs Sonic.Exe, there can only be one!

Hit the play button in the main menu, since there's only one way to play this song, and give it your best to reach the end of it by playing its notes. When arrow symbols above Sonic match, press the same arrow key on the keyboard to hit that note.

If you miss hitting the notes too many times in a row, you will lose and have to start again from scratch, so be very careful not to let it happen for anything in the world, but instead, win!