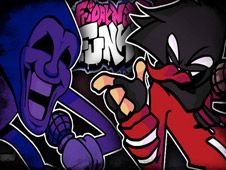 What is FNF: Majin Sonic and AGOTI sings Termination?

Termination is a song that had been received quite well by the FNF fanbase, because if that had not been the case, we don't think it would have been featured in this brand new mashup where it has Majin Sonic and AGOTI singing it, with you helping the two of them take the song all the way to its conclusion!

Majin Sonic and Agoti, the duet we did not know we wanted!

If you don't reach the end of the song by having missed too many notes of its chart, you lose the game, so don't let that happen, but instead play all of its notes at the right time.

To do so, watch for when arrow symbols float and match above your character, and, at the same time, press the very same arrow key from your keyboard.

You can miss notes by pressing the wrong key or pressing the right key but at the wrong time, so be careful not to let it happen, but instead win and have tons of fun!