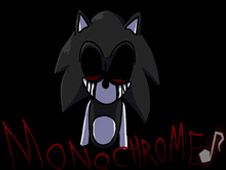 What is FNF Sonic.EXE and Majin Sonic sings MonoChrome?

We really love the fact that in the FNF Games category of our website we can now put forward for you all a mod that features not one, but two really creepy versions of Sonic the Hedgehog, one being the EXE one, and the other one the Majin version, who together with you will now sing the fresh new song known as 'MonoChrome'.

Get hypnotic with the two horror Sonics!

The new mechanics work like this: each time that that Pendulum is at its lowest, you have to press the space bar to keep the hypno going, and know that whenever symbols appear on the screen, figure out the letter of the alphabet that they resemble the most, and press the identical key from the keyboard to hit the notes of the song.

Keep it going until the end of the song to win, but make sure not to miss too many of the notes on your part of the chart, because if that happens consecutive times, you lose. Good luck, we wish you the best, and hope to see you around some more, you won't regret coming over!