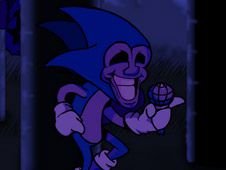 What is FNF: Sonic.Exe and Majin Sonic sings “Too Slow”?

One Sonic in an FNF game is awesome, but two of them is even better, which is why our team is very excited that right at this moment we could share with you the awesome new mod called FNF: Sonic.Exe and Majin Sonic sings “Too Slow”, where the two of them will sing this song together, and you will help them complete it!

Sonic Vs Sonic, who wins?

There is only one song, so hit the play button, and then watch for when the arrow symbols above YOUR Sonic are going to match one another, which is when you will have to press the same arrow keys yourself, and if you keep at it correctly until the end of the song, you are going to win, simple as that!

Of course, losing is also in the cards, and it can happen if you miss pressing the keys too many times in a row, so be careful not to let that happen for anything in the world!