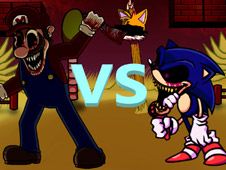 What is FNF Mario.EXE vs Sonic.EXE (It’s a me x Too Slow)?

A mash-up song of It’s a me and Too Slow is what you will sing right now with both Mario.Exe and Sonic.Exe, two of the most popular characters in FNF Games, no doubt, with which you're about to have an even better time!

When you see arrow symbols float and then match above your character on the right, that is when you have to press the identical arrow keys to hit your notes, doing it until the conclusion to win, but know that if you miss hitting notes multiple times in a row, you lose and have to start all over again from scratch. Good luck, enjoy!