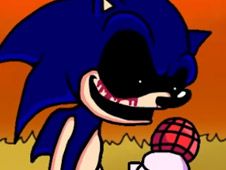 What is FNF: Classic Sonic and Sonic.EXE Sings Too-Slow?

Sonic has been pretty popular in the world of FNF Games online so far, and this trend seems to continue being true today as well when he has become the protagonist as well as the antagonist because you will control the classic version of the speedy hedgehog while going up against Sonic.Exe, who is a scary villain who looks like a creepy Sonic who will scare the life out of you.

A music battle between Sonics is here, don't miss out!

The song you are going to duet is called Too-Slow, and when your turn comes, you will see arrow symbols above BF's head match with one another. Match those symbols by pressing the same arrow keys yourself, and keep doing it until the end of the song if you want to win.

Miss to press the keys at the right time too many times in a row, you are going to lose the whole game and have to start it all over again from scratch. Good luck, enjoy!