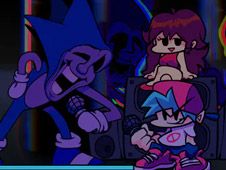 What is FNF: Majin Sonic and Sonic.Exe Sings Chaotic Endless?

After trying to defeat him by themselves, Sonic.Exe and Majin Sonic, the two most cursed versions of Sonic have teamed up to take on their mortal enemy, but we are sure that you are ready to help our blue-haired boy win, and you will have to help him achieve victory on a brand new song called Chaotic Endless!

Only you and BF can defeat the horrors of two cursed Sonics!

There is only one song in this game, so hit the play button and get straight to the fun! Play the notes of the song at the right moment in their charts in order to win, which you do by using the arrow keys.

How? Well, you press the arrow keys at the same time as arrow symbols above BF match with one another, but be careful not to miss pressing them too many times in a row, or you lose the whole game. Enjoy!