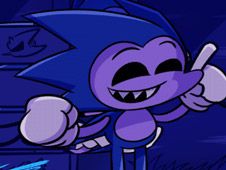 We don't think that Majin Sonic and Garcello have ever battled one another through music, so we are very excited that the two are finally going at it on our website right now when all of you are invited to have the most fun possible with the game where the two dukes it out on the popular Endless song!

Majin Sonic and Garcello are about to have endless fun, join them!

In this rhythm game you win once you've reached the end of the song by playing all of its notes according to the charts, so pay careful attention to the arrow symbols floating all around Garcello.

When they match with those above his head, press the same arrow keys on the keyboard to hit said note, but know that if you miss doing it too many times in a row, you will have lost and be forced to start again from scratch.

What's there to wait for? Let the fun begin right now, and stick to our website, since more promising games are on their way, you would not want to miss them!