FNF vs Garcello but Bad 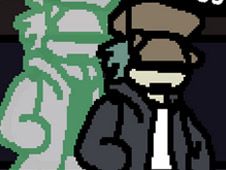 What is FNF vs Garcello but Bad?

Garcello has constantly been one of the most popular characters to appear in multiple new FNF mods online, which is why we are not at all surprised that right now we've got a fresh one to share with you, the game called FNF vs Garcello but Bad, which features the classic Vs. Garcello mod, but with everything you loved about it stripped down!

Learn more about FNF's Garcello, in case you don't know who he is!

Garcello is a man with teal hair who is seen smoking all the time, and this is mostly because he is quite nervous and angry all the time, and this calms him down. He has become really popular in FNF Games, and this time, the game he is featured in has bad animation and art style, the songs are not mixed properly, so they sound horrible, and even the gameplay is somewhat shoddy, which is why the game is 'bad'.

Just like the other bad FNF Games, it still has its own charm, and we're sure you will do your best to help Boyfriend defeat him, something we teach you about right now and here. When the arrows floating around Boyfriend match, press the same arrow on your keyboard, not one moment later or sooner.

That is how you hit the notes of the song, but missing them too many times in a row causes you to lose the game, so don't let that happen for anything in the world! Good luck!