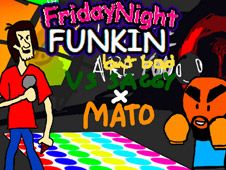 What is FNF: VS Shaggy X Matt But bad?

One of the hardest duos to beat in the world of FNF Games is that of Shaggy and Matt, because they are a real force to be reckoned with when the two of them are teaming up, just like they did in their original crossover mod, and like they will do right now in the same mod, but bad, where the graphics are bad, the songs sound awful, but that all makes it funnier.

Take on Shaggy x Matt and their bad music!

Well, whether you play this game in the story mode or free play mode, give it your best to reach the end of the songs by playing all their notes according to the charts, which is done by pressing arrow keys at the same time as the arrow symbols match above BF's head.

Be careful not to miss doing it too many times in a row, or you lose the game and have to start again. Don't stop here, since more awesome mods are being brought today here for you, and it would be a shame for you to miss them!