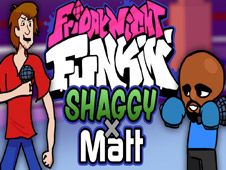 What is FNF vs Shaggy x Matt?

We love it when two antagonists who have been defeated by Boyfriend team up and try to take him down together, only for them to be defeated once more, just like we hope it is going to be the case right now when you are all invited to have fun with FNF vs Shaggy x Matt. Yes, you have to defeat both Shaggy from Scooby-Doo and Matt from Wii Sports, together, and you will duel each other on the following custom songs:

Well, as per usual, pick between the story mode and free play mode, and then give it your best to reach the song's end and have the progress bar in your favor to become the winner, simple as that. To do that, you need to play the songs according to their charts.

So, when you see arrow symbols match above BF's head, press the same arrows on your keyboard, not one moment sooner or faster, because if you miss too many notes, you lose the game. Good luck!