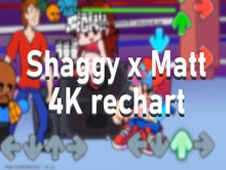 What is FNF vs Shaggy x Matt But only 4 Keys?

The FNF mod that offered a crossover between Matt from Wii Sports and Shaggy from Scooby-Doo had been a mod really well received by audiences of our website, and we're very happy that it returns right now with a new version, where you get to use only four keys to win the rhythm battle on the following songs:

Defeat Shaggy and Matt on the 4K re-chart of their mod!

Whether you are playing in the story mode or free play mode, the way to win remains the same, and it is playing all the notes of the songs at the right time in their charts, until the song ends, in order to win, because if you miss pressing the keys too many times, you lose.

Press the same arrow keys as the shown symbols matching above your character, but don't press them too early, too late, or hit the wrong one, since that counts as a miss, and you know what happens if you have too many. Good luck, enjoy!