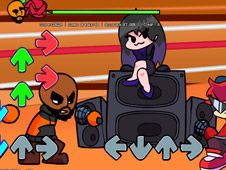 What is FNF vs Matt Deluxe?

Matt from Wii Sports is certainly one of the most popular characters to continuously appear in our Friday Night Funkin' Games series, and he is making his return right now as well, when we invite you all to play FNF vs Matt Deluxe, where his mod's songs have been remixed, we've got new animations, and a brand new song as well:

Stand up to Matt once more, and this time, have even more fun!

Choose to face off against this character in either the story mode or free play mode, having the same goal in both, which is to reach the end of the songs by playing all their notes according to the charts.

How? Well, when you see arrow symbols above BF match one another, you need to press the same arrow key. If you miss doing that correctly too many times in a row, you lose, so pay attention not to let it happen, but instead, WIN!