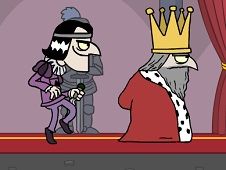 Murder is one of the most popular games on Poki, and rightly so because the game is really great. Your mission will be to kill the king, but you will always have to be vigilant because the king's guards are close to him, and the moment you see that you are trying to kill him, you will be punished.

Slowly step behind the king and stick the knife in his back, like a murderer!

In order to win this game, you will need to be very patient and attentive to the king's moves. You have to act like a murderer at a murder, which is why you have to walk slowly behind the king, and when the king is not looking at you, you have to take out the knife and put it behind him. Be very careful because, from time to time, the king will return, and if he sees that you are trying to kill him, he will order the guards to imprison you or even kill you. After you manage to kill him, you will have to put on the king's clothes and move on to his palace, and the corpse will be left behind.

Once you manage to kill the king, the next step will be to become the king yourself, and in this way, the roles will change, but this means that you will always have to pay attention to all the people around you. because everyone will try to kill you. If in the first level it is about a servant of the king who turns into a murderer, in the second level you will have to avoid a servant who is always behind you, and in the third level we are talking about a clown trying to it kills you. Each individual has his own weapons and will try to destroy them as soon as possible, be careful!

In order to succeed in winning these missions, no matter which side you are on, whether we are talking about a king who must beware of criminals or whether we are talking about criminals who have to kill the king, you will have to be patient. Probably the most important thing is to gain experience based on previous difficulty levels, after which you will be ready to attack at the right time.