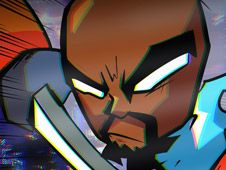 We go even further into the future in the world of FNF Games where you have to go up against Matt WiiK 1000, where he has replaced his wooden sword with a metal one, a real one, and he even brought along some really amazing new songs for you to battle him on:

After you've made your choice between the story mode and free play mode, in either case, you need to keep hitting your notes according to the charts until the song ends, which is when you win, so press the arrow keys at the same time you see the identical symbols matching above BF's head.

Know that missing to hit them too many times in a row, you will lose and have to start all over again from scratch when you see your health bar depleted. Good luck, enjoy!