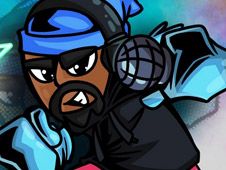 What is FNF vs Matt Neo (Wiik 3 Update)?

The Neo version of Matt from Wii Sports is back in our category of Friday Night Funkin' Games online, where he had always been very well received, but this time this mod has been remade and extended even further, so now it has a total of three awesome weeks in which to battle against this character, and the tracks featured are the following ones:

Boyfriend VS Neo Matt, not the rhythm battle you want to miss out on, trust us!

After choosing to either undertake one week at a time from the story mode, or one song at a time from the free play mode, your goal is the same, and it is to win the songs by reaching their conclusion, which only happens if you play all their notes correctly according to their charts.

To do this, you need to press arrow keys from your keyboard at the same time as the identical arrow symbols floating around BF match above his head, but remember that if you miss doing that too many times in a row, it will lead to you losing and having to start again from scratch.

Good luck we wish you all, and we excitedly invite you to play more games from this or any of our other awesome categories!