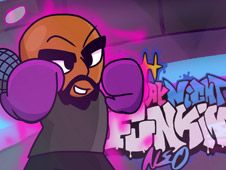 What is FNF vs Matt Neo?

FNF Neo is one of the classic Fnf mods online that have appeared in this series so far, because it brings lots of awesome colors, sprites, backgrounds, and fun animation, all of them in a really cool package, and in addition to the classic antagonists you faced off in it, we now bring you a new one, Matt, who now has his own FNF Neo mod.

Defeat Neo Matt from WiiSports on his original custom songs!

When you see that arrow symbols above BF's head are matched with one another, press the same arrow keys on your keyboard, and keep on doing so until the end of the song if you want to win.

Be careful not to miss pressing too many of the keys one after the other one, because if that happens, you lose the game and have to start it again, something we don't wish for any of our players.

Instead, we wish you all the best, good luck, and fun as only here is possible!