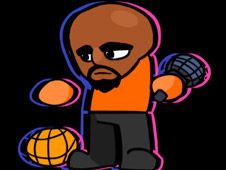 What is FNF vs Matt WIIK 3?

Matt is one of the most popular characters to have appeared in FNF mod games online so far, but he has not had many versions of his week out, which is why we are delighted that right at this moment we've got you all covered with a brand new version, one called FNF vs Matt WIIK 3, where you are about to have tons and tons of fun!

Learn how to defeat Matt from Wii Sports!

Matt is a basketball player from Wii Sports game who is a dark-skinned man with bald hair and a basketball uniform, and this mod adds four more original songs over his three first ones, so the list goes like this:

Awesome, right? Help Boyfriend reaches the end of all these songs and makes the progress bar green by hitting all the notes of the songs at the right time. To do so, hit the arrow keys on your keyboard at the right time, meaning when the arrow symbols above BF match one another, and don't screw up the timing too much, or you eventually lose. Good luck!

Wednesday: Get Dress For School