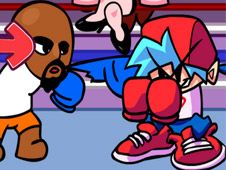 What is FNF Vs. Matt Boxing Fight?

We really love it when the rhythm games from the Friday Night Funkin Games series on our website switch things up and offer something different, just like it is the case right at this moment when our administrative team is delighted to share with everyone here the game called FNF Vs. Matt Boxing Fight.

Box Matt and win by having a better rhythm!

The game still acts as a rhythm game with music, despite also having boxing in it, because each musical note also represents a punch, so when the two characters are following the beat, they are also throwing punches.

So, the original gameplay is still true, as you press the arrow keys at the same time as arrow symbols above BF match with one another, doing this until the end of the song and beating Matt at boxing, depleting his stamina bar.

Once the stamina meter is full, press Z to gain random power, press the spacebar to regain a shield, and if you want to dodge, press the E key. If you win the story mode, you unlock a new custom song in the free play mode.

We wish you all the best and all the fun in the world, and we hope that you keep on playing our awesome new games of the day!