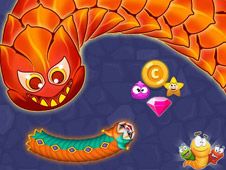 Snake games and worms have always been important elements when it comes to io games online multiplayer, which is why we now bring you yet another amazing and high-quality game like that right now, which has all these elements and more, resulting in one of the best experiences you could be having here today, all free of charge, of course!

Use the mouse to move your worms through the maps, where you try collecting gems to get bigger, and if you are bigger than other worms that slither around, you can bump into them to eat and eliminate them, ranking higher and playing until you are the king of the maps.

There are three modes to play the game in:

The gems can look like fuzzy creatures or maybe even candy, depending on the mode, and you can upgrade your own skin in the main menu with the coins you earn along the way by playing in any of the three versions. Try to rank higher than other players and become a master of this new kind of io game with worms!