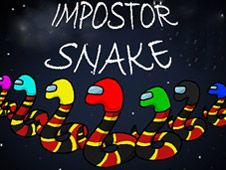 What is Impostor Snake IO?

The Among Us Games category of our website has always had really interesting combinations of games since it is always lots of fun to combine two mediums or two different series in an exciting crossover, just like it is the case today with the addition of the game called Impostor Snake IO, which brings together the world of the imposters of Among Us and the classic arcade game called Snake, which many of us used to play on the first generation of mobile phones.

Learn how to become the biggest imposter snake!

Of course, an imposter would also be a snake, since both snakes and imposters are known for being secretly evil and sneaky, and in this game, you use the mouse to control a snake that has a colorful body and an Imposter's head.

Move the mouse in the direction you want the snake to go, and go after the colorful orbs on the map, because the more of them you eat, the bigger your snake becomes, and this also increases your score.

There are other snakes lurking around, so avoid those that are bigger than you, so they don't eat you up, but eat up and eliminate snakes smaller than you to eliminate competition.

Try to survive for a long time, get lots of points, and become the biggest snake on the map!