FNF vs Impostor Among Us v2 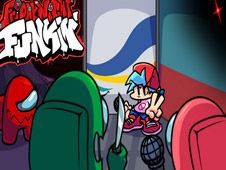 What is FNF vs Impostor Among Us V3?

Going up in rhythm battles against Imposters from Among Us has always been something really popular in our category of Friday Night Funkin' Games online, which is why this mod has now reached its third version, with V3 offering you even more sus antagonists to defeat, and even more awesome songs, such as :

Can you once again defeat the sus imposters with the power of music? Let's do it!

After picking between playing either the story mode or free play mode, in either case, give it your best to reach the end of the songs by playing their notes following the charts, when your turn comes.

This means that you need to watch for when arrow symbols above BF match one another and press the same keys from the keyboard yourself to get that note right.

If you press the wrong key, or the correct one but too early or too late, that counts as a miss, and if you make too many misses in a row, you lose the game and have to start it again from scratch. Enjoy!