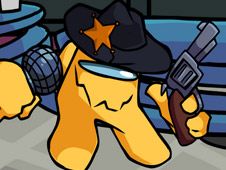 What is FNF vs Yellow Impostor (Sheriff Showdown)?

FNF Sheriff Showdown is a special mod where the Yellow Impostor you know and love is also a sheriff in the wild west of space, and you have the amazing chance of going up against this character on no less than three songs, as this is a full week mod:

Let's have an FNF Sheriff Showdown against the Yellow Impostor!

From the main menu you have to make a choice between the story mode and free play mode, and, in either of the two ones, reach the end of the songs by playing all their notes according to the charts to win.

How do you do that? You press arrow keys at the same time as the identical arrow symbols match above BF's head. If you miss hitting the notes multiple times in a row, you lose and have to start again from scratch, so be careful not to let it happen.