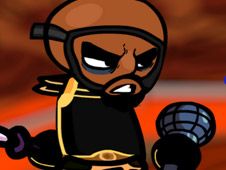 What is Wii Funkin Vs Matt SwordFight Showdown?

It seems that Matt from Wii Sports has become even more popular in the world of FNF Games online, something we are very glad about because right at this moment we are able to share with you all the awesome game called Wii Funkin Vs Matt SwordFight Showdown, where he is not only a battle rapper, but a samurai as well, hence the title and this mod brings along four brand new original custom songs:

After picking between the story mode and the free play mode, what you have to do is get to the end of the songs, play all their notes, and win once the progress bar has been filled towards you!

This means that when you see arrow symbols above BF match with one another, you have to press the same arrow keys, but if you miss doing it multiple times one after another, you lose, so be careful.

Good luck we want to wish you all, and we definitely invite you to stick around, since you never know when new games with FNF might pop out here!