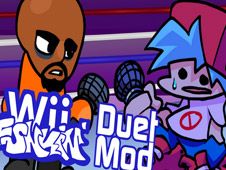 What is FNF vs Matt Wii Funkin’ Duet Mod?

Matt from Wii Sports is currently one of the most popular characters in the world of FNF Games, and we're very excited that he has made his return right now, when you, by taking on the role of BF, will duet with Matt continuously, because that is how the game works, so the two of you will bounce off each other one verse after another until the song ends.

This is a full mod featuring lots of awesome custom songs, such as:

Duet with Matt and have incredible musical fun!

In either the story mode or the free play mode, when you see that arrow symbols above BF are matching with one another, you need to press the same arrow keys, and you need to keep doing so until the song ends, in order to tilt the progress bar towards you and win.

Of course, this also means that if you miss too many of the notes consecutively, you will be off beat for too long, and you lose, so be very careful not to allow that to happen. Enjoy!