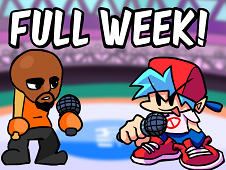 What is Friday Night Funkin VS Matt from Wii Sports?

Matt is a virtual character from Wii sports games. We most often meet him in tennis games where he proves to be the weakest player, being nominated 6 times in a row for the title of worst player of the year. Well, this time you'll have to fight Matt on the dance floor on three new types of songs he proposes.

What are the new songs from VS MATT week?

As you can see in the game, you will have three new rhythms that you will have to dance as well as you can, and these are: Light it Up, Ruckus, Target Practice.

He is a bald man, wearing a beard (beak style), and on the top of his clothes, he wears an orange boulevard. At the bottom, he wears a pair of black pants, and in his hand, he holds a microphone and a tennis paddle.

use the arrows to help your player dancing!