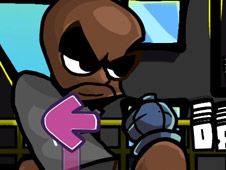 Matt’s Pursuit is to defeat FNF's Boyfriend, and he will attempt it once again today with the Golden Glove Edition mod, where you and Boyfriend will try to stop him from doing that by defeating him on no less than twelve tracks:

After making your choice between the story mode and free play mode, in each case, give your best to reach the end of the songs by playing their notes according to the charts, which is how winning is achieved.

To do it, press arrow keys at the same time as the identical arrow symbols match above BF but be careful not to miss hitting notes too many times in a row, which leads to you losing and having to start again from scratch. Good luck, enjoy!