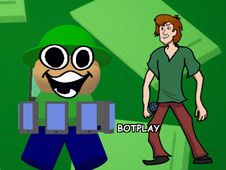 What is FNF: Golden Apple with Shaggy Covers & Extra Keys?

FNF: Golden Apple with Shaggy Covers & Extra Keys takes that original Dave and Bambi mod and makes it even better through the addition of Shaggy from Scooby-Doo, who is here to sing covers of the mod's songs, which also have some extra keys, for some extra fun. The updated tracklist is:

Let's beat the FNF Golden Apple mod, now with covers by Shaggy and some extra keys!

After you make your choice between the story mode and free play mode in the main menu, in either case, give it your best to reach the end of the songs by playing all their notes according to the charts, which is how you win. Press arrow keys at the identical time as the same arrow symbols match above BF to hit notes.

Be extra careful not to miss hitting too many notes in a row, or you lose and have to start again from scratch. Good luck and all the best we want to wish you all, as per usual!