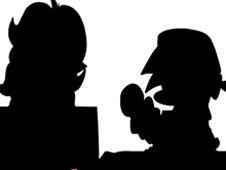 Yes, we've got it in us to bring you one more FNF mod to play for free today on our website, and after we've seen how much you really enjoyed the previous ones, there is no doubt in our minds you will love this brand new addition as well, a cool new mod called Friday Night Funkin Bad Apple!

Well, this is a mod that reimagines the week when Boyfriend had to fight Mummy Mearest, who is the demonic mother of Girlfriend who does not want her daughter to date this boy, but instead of all the characters looking like they normally do, they are all in shadows, but really well-animated ones, which flow and move realistically. Bad Apple is the name of the custom song you will fight her on.

Of course, the Boyfriend wants to be together with his Girlfriend, so make sure to win the rhythm battle for him to achieve that! When you see the arrows over him match, don't waste a second and press the same arrow key on your keyboard, and if you get the timing right to the end of the song, you win.

Be careful, because if your timing and focus are not up to par, and you miss multiple notes in a row, you lose the game and have to start again, something you can't want happening, right?