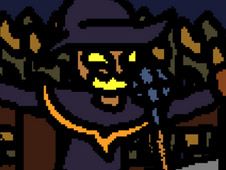 What is Friday Night Funkin Vs Zardy But Bad?

There has been a sub-genre of Friday Night Funkin Games online where they are re-created from scratch and are made to look, sound, and be played worse than the originals, which is made to be very funny, and we're sure that they accomplish that goal, just like we've seen has happened today with the game called Friday Night Funkin Vs Zardy But Bad. Zardy is a scarecrow against whom you will duel on the track called Monster, but this is the bad version of the game.

Beat the Zardy Bad Mod and prove you're a master of rhythm!

Just like in other FNF Games, you'll use the arrow keys to hit the notes of the songs and play them at the right time. When they match above BF, that is your queue to also press the same arrow key on your keyboard, but be careful not to miss playing too many of the notes one after another, since too many misses in a row cause you to lose the game.

We wish you good luck, all the best, and we hope to see you play even more of our new Friday Night Funkin Games of the day!