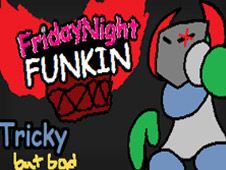 What is Friday Night Funkin Vs Tricky But Bad?

There have been many FNF mod characters, original characters that have captivated the hearts of fans of this series, and one of the most popular ones has been Tricky the Clown, who has had lots of games on our website so far, and today we're glad to introduce you to a brand new version of his mode, where the songs are bad, the sprites look bad, and the animation feels old because this is the bad remake of the original, called Friday Night Funkin Vs Tricky But Bad!

How to play FNF bad games:

Well, when it comes to their gameplay, it still remains the same, with you using the arrow keys to sing the notes of the songs at the right time, so when you see the arrow icons match above BF, at that time you have to press the same arrows on your keyboard, and not one moment later or sooner, because that is a miss, and having too many misses in a row means losing the game.

Tricky returns with his two original and awesome songs, called Improbable Outset, and Madness. Good luck to you, we wish you all the best, and we hope you stick around for all the fun that is to come!