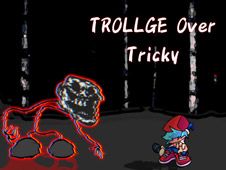 What is Friday Night Funkin: Trollge Over Tricky?

Tricky is definitely one of the most popular characters to have been modded so far into the FNF Games series, but so is Trollge, or, rather, TrollFace, two characters that are now combined, and so are their songs, because you play against a character that is both Tricky and a TrollFace at the same time. Defeat this new being right now, on the following three custom songs:

Trollge Tricky, is the new scariest FNF character, so defeat him!

Of course, for this mod as well, you get to pick between the story mode and free play mode, and in either of them, you've got the same goal, which is reaching the end of the songs and playing all their notes along the way, because if you do that, the progress bar will tilt towards you, and you win.

This means that when arrow symbols are matching above BF, you have to press the same arrow symbols and keep doing it until the end of the song to win. Don't miss pressing too many keys in a row, or you lose. Good luck, and enjoy!