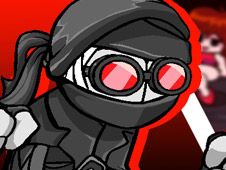 What is Friday Night Funkin Hank Over BF?

It's a great day to be a fan of Friday Night Funkin Games online and be visiting our website, since, as you can clearly see, we keep on bringing you some of the best new mods out there, mods you've not seen before anywhere else, just like it is the case at this moment with Friday Night Funkin Hank Over BF or FNF Hank Mod!

Who is Hank, your new FNF protagonist?

Yes, instead of battling against Hank, he replaces Boyfriend in this game, and he is a ninja dressed in all-black, who has his hair in a ponytail, and who wears red-tinted glasses, with his microphone also being in red, matching the glasses. Help him defeat Pico, Daddy Dearest, Mummy Must Murder, and all the other antagonists of the game in their custom songs!

When you see arrows floating and matching above Hank, press the same arrow keys on your keyboard, so that you play, sing, or rap the notes of the songs at the right time. If by the end of the songs the progress bar has turned in your favor, you will have won. Be careful, though, because if you miss hitting too many keys in a row, you lose. Good luck!