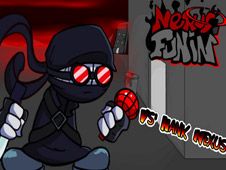 What is FNF: Nexus Funkin’ vs Hank?

Hank from Madness Combat returns right now in our Friday Night Funkin' Games category, and he does so in his Nexus version, a brand new version of the character, which means that you are going to go up against him on some brand new songs too, which are:

You can choose to go up against this character in either the story mode or free play mode, but no matter the choice, the way to win is the same, and it's by reaching the end of the songs, which you do by playing your notes when your turn comes.

This means that when arrow symbols match above BF's head, you have to press the identical arrow keys, but know that if you miss doing that multiple times in a row, you lose. Good luck, enjoy!