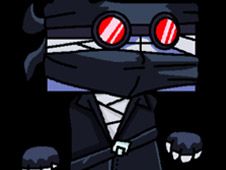 What is FNF: Ron Pretends To Be Hank (in a cool way)?

Ron, the folder-like character that is quite comedic in all of the mods that he appears is now trying to act really cool, and, since it's Halloween, he thought to do it by dressing up as Hank, the vicious and skilled assassin from the Madness Combat world, and now Boyfriend and you will fight against this disguised Ron, on the iconic tune known as 'Accelerant'.

Show Ron that even if he channels Hank, he will still be no match for you and BF!

After choosing between the story mode and free play mode, no matter the choice, give it your best to reach the end of the song by playing all of its notes since that is how you win.

This means that when arrow symbols above BF match, you will have to press the identical arrow keys. Don't miss the moment too many times in a row, or you lose. Enjoy!