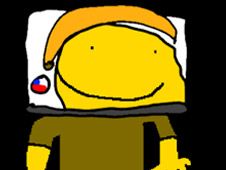 What is FNF: Ron sings Folders In The Ocean?

Friday Night Funkin' Games are a great way for people to make all sorts of funny memes, even more so, playable ones, just like it will be the case right now with FNF: Ron sings Folders In The Ocean, a mod where FNF's Ron from the BOB V2 mod is going to be singing Folders in the Ocean, which is a parody song of the hit song called Astronaut In the Ocean, of which many people made fun of on the internet already.

Can you helo Ron sing his heart out?

Boyfriend is going up against Ron, as he is the only worthy challenger, so watch for when the arrow symbols match above his head, because at that moment you will have to press the same arrow keys, something you have to keep doing until the end of the song to win. Miss doing that too many times consecutively, and, you guessed it, you lose!

There is only one song here, so hit the play button, give the game your best, and make sure to stick around and keep having fun as only here you can!