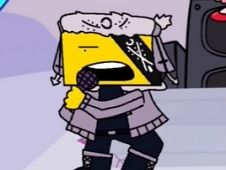 Certainly, RUV or RON are characters known to all FNF fans, but the creators of this mode thought of combining the two characters so as to succeed in creating a very interesting and cute one; our opinion is that they succeeded!

As you can see, the character is based on the appearance of the famous FNF RON character, who is much more square, but this character is made to fit RUV's clothes and dimensions, wearing RUV's cap. This character is also the main antagonist in the way, and his opponent is the famous Boyfriend who at the moment does not understand anything considering that he does not know who he is fighting against. In the game you will have only one song that you can duel, and this song is present in a single week.

Use the arrows to start dancing!