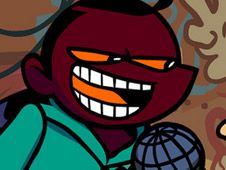 AGOTI, Tabi, Ruv have banded together to sing Whitty's songs from the Definitive Edition, so can you help the bomb man defeat these new antagonists that want to steal his songs? The tracklist is:

In both the story mode and free play mode you win by reaching the end of the songs, so when you see arrow symbols float and match above your character, that is when you need to press the identical arrow keys to hit your notes. Do it until the conclusions to win, but don't miss hitting the notes many times in a row, you have to start again from scratch. Enjoy!