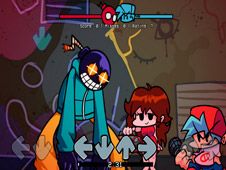 What is FNF vs Whitty (Definitive Edition)?

Come play FNF vs Whitty (Definitive Edition) if you really love this angry character whose head is a bomb, because this mod expands his tracklist and brings along tons of awesome new music to enjoy:

FNF vs Whitty the Definitive Edition is here, play it!

Whether you face this character in the story mode or free play mode, to win you have to do the same thing, which is playing all your notes according to the charts to reach their end. To play notes you press arrow keys at the same time as the identical arrow symbols match above BF's head.

If you miss hitting notes too many times in a row, you have to start again from scratch, so don't let it happen. Enjoy!