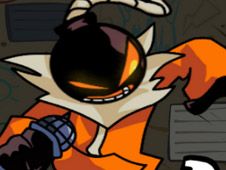 What is FNF vs Whitty A-side Detonator Mod?

Whitty returns in FNF with an A-side song called 'Detonator', on which you and BF will face off against him in the back-alleys of the musical city, because you need to defeat him at all costs, otherwise he will explode and cause lots of damage. Let's go!

Stop Whitty and his Detonator with the musical power of FNF!

As the song progresses you will see arrow symbols float and match above your character, a moment when you need to press the identical arrow keys from the keyboard, because that is how you hit notes, and if you keep hitting notes until the song's conclusion, you will have won.

Be careful not to miss hitting notes multiple times in a row, because that happening leads to you losing and having to start again from scratch. Good luck, we wish you all the best, and invite you to stick around for plenty more fun to come!